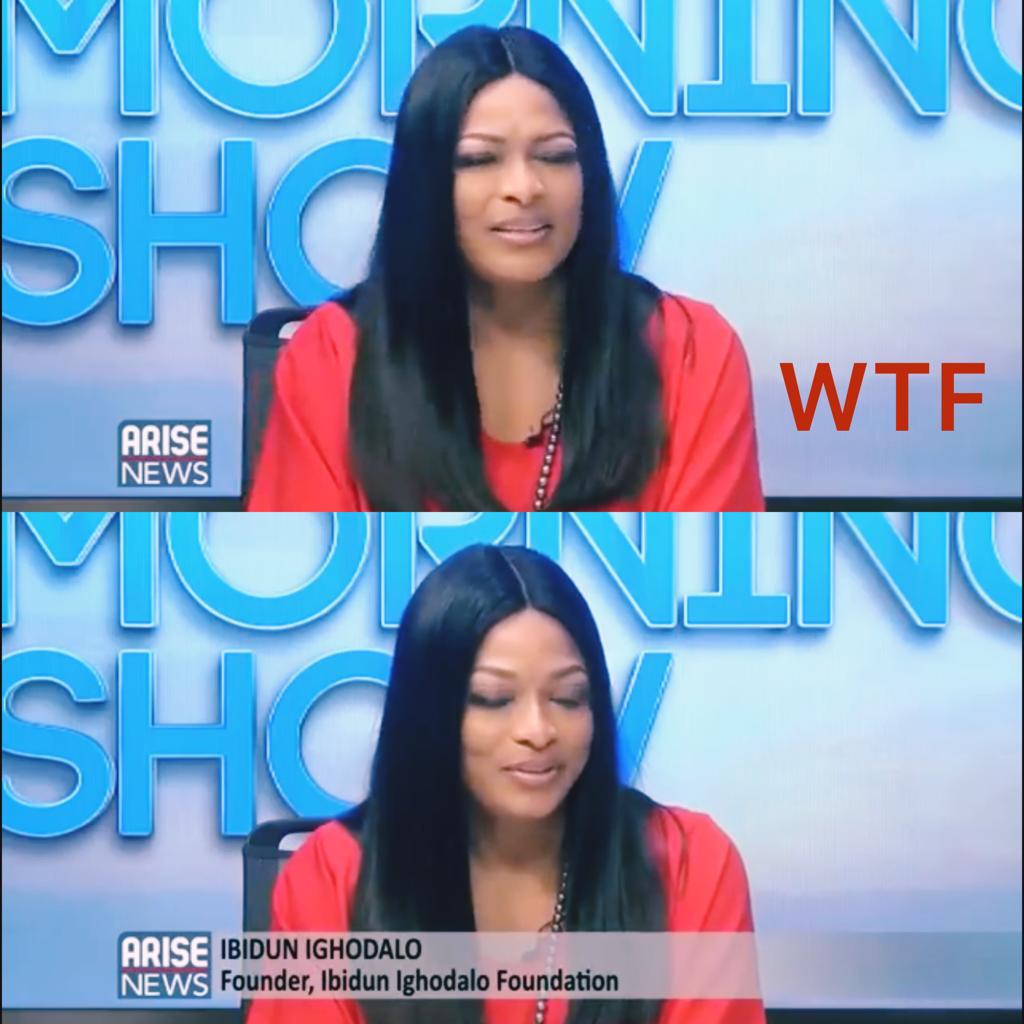 Late Ibidunni Ighodalo had shared her struggles on an interview, where she found it difficult to conceive and had also undergone eleven (11) IVF procedures before adopting two children with her husband whom she has been married to for thirteen (13) years.She opened up a foundation for that reason and provided grants for women to pay for IVF treatment and also help reduce the stigma around IVF in Nigeria. The family statement revealed that Ibidunni had died of Cadiac Arrest.May her soul rest in peace.

Mr Ifeanyi Apusiobi (34) who on Sunday, 21st June 2020, attacked two of his children by name, Chinecherem Apusiobi, female (7years old) and Obinna Apusiobi, male(5years old) with a pistol on their heads while they’re asleep. The police said that they’re yet to ascertain reasons behind his act and that the suspect used same object to Injure his father on the year award, Dominic by name who’s 72 years old.The police arrived te scene around 1am and took the victims to hospital. On arrival, the two children where confirmed dead, while the father is responding to treatment.While their corpse has been deposited in a morgue, investigation is still ongoing about the reason behind the act.

Report has it that a Calabar Slay Queen, Juliet Ita, has been beaten to death by his Sugar Daddy lover, Jim Roach whom she has been living with for seven (7) years. The foreigner is said to have told the police that Juliet committed suicide after an argument on friday but her friends think otherwise. Juliet Ita, popularly known as Mhiz Amber was found dead in the house she was living with her white Sugar Daddy, Jim Roach in Calabar, Cross River State.One of her friends who took to Social media narrated that she was four months pregnant and full of life. Mhiz was in an abusive relationship with Jim and demanded a ₦5 million naira pay off to move on with her life but Jim only agreed to pay her 2million naira. One million naira first, and the remaining to be paid ₦100,000 monthly. Mhiz was bent on leaving to start up a business and sustain herself and child. It’s over 4days since her death, her lover is moving around freely.

Mrs Victoria Marcus, a mother of two has called for the help of the Federal and Lagos State Government as she was allegedly assaulted by her German neighbour Knoop Jens who lives in same Estate with her.Victoria had reported the incident at the Trinity Police Station when she was attacked by Jen and his lover on December 16, 2018 and was stabbed in her left palm after she complained about a picnic contribution in their Estate at Apapa.Then on 5th of June 2020, Jen and his lover ran into her at a pub in the estate. They smashed her phone, assaulted and insulted her and almost strangled her but she was rescued by her husband and Estate security guards. Victoria and her husband have been married for 15years now. Her husband is an expatriate who works with a company in Nigeria and they live in an Estate designated for staffs of the company.Jens have refuted the claims made by Victoria and also refused to comment further on the matter.Because of the lockdown, nothing much has been done though the matter is still in court. Victoria seeks for justice, adding that her life is in danger.

Three surgeries has been performed on Baby Rukayya who was brutally raped by an unknown individuals two weeks ago at Adogi area of Nassarawa State, yet she still won’t be able to excrete.Uncle to baby Rukayya in an interview confirmed that the “Plateau State Teaching Hospital in Jos helped to perform surgery on her even when they deposited nothing. He added that the parents of Rukayya has no money to feed nor pay for the surgery as the mother is in need of help and appeals to anyone who can help to seek justice for her daughter and help with the bills.She narrated that she fell asleep but woke up without finding her daughter. She raised alarm and during the search, she was found where she was abandoned, with blood covering her genital.No suspect has been arrested as of the time of this report and Rukayya is still in same hospital receiving treatment.

There has been a lot of criticism over the marriage Abdulaziz Shuabib (27 year old actor) and a much older woman, Hajiya Nana ( 60 year old politician) who was once a Senatorial Candidate in Kaduna State. The young actor had said in a short video that his marriage is not a new thing. More younger men now date and marry older women than we know. He made it clear that he depends on himself and did not marry her for wealth. The actor has been in love with her for two years now till they got married recently.

Williams Uchemba narrated on how he adopted a teenage young man named Demola whom he met at a furniture store working as an apprentice. The Imo-native born promised to sponsor his University Education as the young man is determined to study Economics at the University.Demola is 18years old and he has finished his Secondary school with good grades. Williams who is known as a philanthropist and actor shared  a picture of him and his new son.

Many don’t know that the Cameron pepper you buy is Ose (pepper) Nsukka. According to story posted by Roy Ekwueme, a vibrant Nsukka young visionary man. He narrated that Late Professor Joseph Uzor Ogbonna of Agric Dept. UNN, bred  species of pepper and named it “Ose Nsukka”. He as well bred the tomato we know as “Derica”.Professor Joseph won a UNESCO prize for these in 1985, and was asked by the University to plant an Odor tree at the entrance of the school.According to the story, some Cameroonian students in the 1980’s in UNN took the seeds home and grew it, but because the pepper didn’t grow well outside Nsukka, they resorted to grinding it. This is the reason there is no fresh Cameroon pepper but only dried one.The research discovered that since the Ose Nsukka is highly perishable, the preservation industry had to come in and this made them test different methods and what worked was the Salting- Blanding-Sun drying which worked perfectly since it retained its flavour and yellowish traits.Ose Nsukka is becoming very popular and farmers are making a lot of
money from it.

The Economic and Financial Crime Commission (EFCC), Lagos Zonal Office has arrested an Instagram comedian/Social Media Influencer by name Adedamola Adewale, 20 years, and his accomplice, Lamina Hamzat Ajibola, at Lekki Lagos State. The others, Israel Onyebuchi, Emmanuel Olayode, and Valentine Nwokorie were picked up at the Ibeju-Lekki area of Lagos State for their alleged involvement in internet-related fraud.Several items were recovered from the suspect including a sum of ₦9,000,000.00 (Nine million Naira) in Adewale’s account, two Toyota Camry 2009 model cars, laptops, and mobile phones.Nwokorie, from the investigations, revealed that she poses as an American female citizen and a porn star to defraud it’s citizens while Onyebuchi was engaging on forged foreign Cheques. All these Suspects will be arraigned in court soon, once they are through with investigations.

Another tragedy struck as a student of Federal University of Oye Ekiti, passes away in her boyfriend’s house. The reason for her death is not yet ascertained but she slept and didn’t wake up the next day. Her death is so similar to that of another girl who also lost her life alongside her lover few days back.As of the time of this report, the alleged boyfriend is on the run and have been declared wanted.

Popular Nigerian Singer, Oladapo Daniel Oyebanjo, well known as D’banj has demanded ₦100,000 from the lady who accused him of rape. Miss Seyinta who alleged that D’banj raped her in a hotel in Victoria Island, two years ago has been asked to pay the said money within 48hours or face legal action.According to D’bang, the allegation was meant to destroy his reputation as it was false. He posted in his Instagram page, a pre-litigation letter signed by his lawyer Mike Ozekhome (SAN) and addressed to Miss Babatayo’s lawyer and demanded an apology should be published in at least four national dialies and social media handles used by his client.

A reliable source has confirmed the death of the present Nsukka Local Government Chairman, RT. Hon. Patrick Omeje. His news broke out this morning as he died in a hospital at Enugu. The chairman has been sick for a long time but till now, the ailment that lead to his death have not been disclosed. The stake holders, political officers, well wishers and friends, are gathered now at Bishop Shanahan Hospital Nsukka to receive his corpse.May his soul rest in peace

A paedophile was caught and handed over to police over the rape of a 13 year old girl in Umunze Anambra State.The girl narrated to the Deputy Police Officer (DPO) on how Benson Chidebe Ibeh ( Name on Facebook) mercilessly raped her. The DPO at once ordered for his detention. Chaos rose as the suspect took to his heels and the police chased after him. One of the police officers slipped and fell down while the suspect took his AK-47 gun. It took a lot of hard work from other police men who intervened before he was disarmed.His transfer from Umunze to Awka Police head quarter was quickly facilitated

A lot of people are still in doubt if the Comedian Obinna Simon, popularly known as MC Tagwaye is really Igbo by tribe. His perfect way of mimicking the President, President Muhammad Buhari, has earned him a lot of recognition and respect. He was born and also grew up in the north that made him fluent with their native language. MC Tagweye tied the knot with his long time friend, Hauwa, the Daughter of Maryam Uwais, Special Adviser To President Buhari On Social Investments. Congratulations to them!

Women Tower Foundation reporter confirmed a young guy of about 23 years of age was gunned down in a barber shop at Orba Nsukka. Eye witness who pleaded unanimous said the victim is a known cultist in the area and all effort by the parents to change him proved abortive. At about 4:00pm on Monday while he was having a hair cut, two armed guys stormed the babing saloon and shot him on close range. While they try to escape, one was caught while the other escaped. Police were alerted and he was handed over to the police. From information gathered the young guy had misunderstanding concerning money with his Confraternity members and they came for him.He died at the spot. While his corpse has been taking by the police, investigation is still ongoing as they believe that one of the guy that was caught has a lot of confession to make.