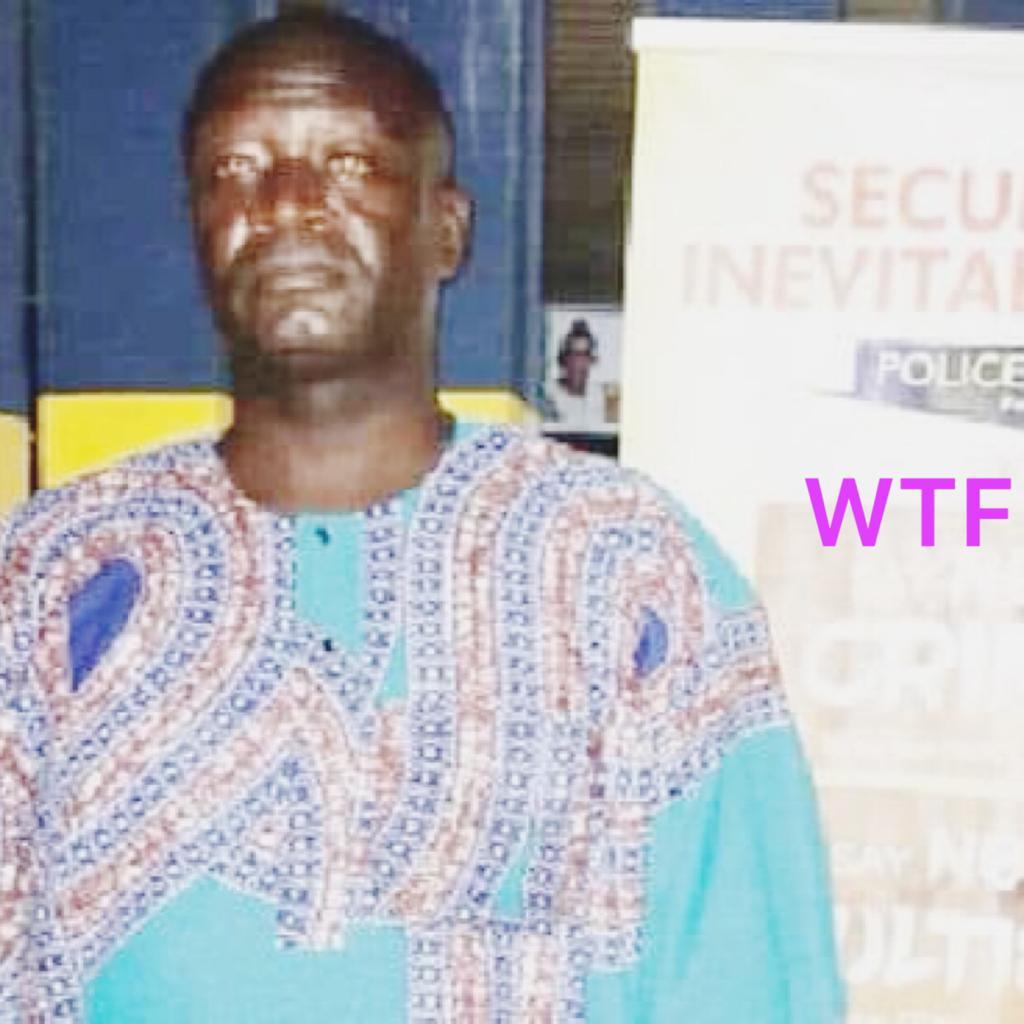 Oluwafemi Oyebola, a 44-year old Pastor of Christ Apostolic Church, Ogo- Oluwa Parish has been arrested by the Ogun State Police Command for allegedly raping, Impregnating and procuring abortion on his daughter three times.The results over the health of the girl is not yet ascertained as the doctors are still running different test and examinations on her to know the extent of damage made.As of yet time of filing this report, the pastor was still cooling off at the police Station.

An alleged serial killer and a suspected notorious assassin, who is believed to be the leader behind the serial klings in Nsukka LG, by name Mr. Eze Ejike, popularly known as Escato, has been successfully arrested by Nsukka Central Neighbourhood Watch in Conjunction with Ede-Oballa Neighbourhood Watch.The Neighbourhood Watch tact team have also promised to get other gang members, however they have asked the law to take its course and the government to maintain the law. They vowed to lay down their guards and resign if these well known assassins were set free and law does not take its full cause for the culprits were preparing to assassinate more people which the security men were there main target before there arrest.

A middle aged man has been nabbed by police for killing his 4-year-old son using a cutlass. The man buried the corpse in his compound, on a shallow grave.Police operatives of Azia Police Station had on 9th of July, arrested Christian Alisigwe, male, of 35 years old, from Azia, ihiala LG, Anambra State.Mr. Christian allegedly killed his son Ebubechuckwu Alisigwe of the same address with a Cutlass and buried him in his compound.The doctor had confirmed the child dead after the corpse was exhumed and deposited at Abam mortuary for Autopsy by the police detectives who visited the scene.The reasons for this man’s action is not yet known.

A wierd photo had been shared of a baby born holding Contraceptive that failed to stop her mother from getting married.The photo got a lot of attention as it shows the baby holding the yellow and black contraceptive coil which failed to stop her mother from getting married.The baby was born at Hai Phong International Hospital in the City of Hai Phong in northern Vietnam.Dr Phuong had narrated that the mother became pregnant because the contraception was on ineffective form. The device may have moved from its original position.The 34-year old mother of the baby had claimed that the coil was inserted two years earlier before she fell pregnant.

Justice has been served finally for Chima Ikwunado, the Port Harcourt Mechanic who was tortured to death by police officers.The Rivers State Police Command have dismissed the Officers from the Eagle Crack Squad who unlawfully inflicted various injuries on Osaze Friday, Ogbonna Victor, Ifeanyi Osuji, Ifeanyi Onyekwere and tortured Chima Ikwunado to death in December 2019.They have all been charged to court for conspiracy and murder.Inspector Sam willingly drove nail dipped into liquid substance into the hands of Late Chima. Inspector Enyina Samuel, Inspector Ayogu Fidelis, Inspector Tope, Inspector Uche, Sergeant Philip Obi, Sergeant Ake Chibuzor are all answering to charges for the murder of Late Chima.At E- crack Squad cell in Mile One Police Station, the female Police Officer known as Sergeant Rose, allegedly fiddled with the private part of Late Chima Ikwunado during torture by using a sharp object to mutilate his penis.Chima is survived by a five month pregnant wife upon his death

A 20-year Old lady was raped and matcheted to death at Gerewu area at Ilorin.People woke up to this tragedy and eye sore of a young lady who was raped and killed. The lady was identified as Abudulrahman Safau Omowumi. It is not yet ascertained of what must have triggered such actions and as of the time of filing this report, the perpetrators of this act are still at large. Until the death of Omowumi, she is a student of Bathelome College Of Health Technology, Shao in Moro Local Government Area Of Kwara State

A newly wedded lady had deleted her wedding pictures online after it went viral that her husband is a “hit and run” man.A lady, Sophie Anthony deleted her wedding pictures with her husband after she was trolled and it went viral. She was advised by friends of the husband’s Ex-wives to reconsider her decisions as her husband who is a hit and run man has been involved in two different marriages sponsored by women. There have been a lot of reactions from Facebook users who gave different narratives of Sophie’s husband and his fake lifestyle.

An unidentified hand of a handsome man has been chopped off by an embittered husband.How the man knew and who told the man off his wife’s affair with this victim is still not known.The man couldn’t hold his anger of seeing another man  un-top of his wife that he reached out for a sharp knife and cut off his hand.The young man was drenched in blood while his hand dropped on the floor. In as much as he made it to the hospital but the woman’s whereabout as of the time of filing this report is not yet ascertained.

A house wife and mother of three, Aisha Dannupawa of Zamfara State who asked the court to dissolve her marriage to Ali Maizinari, because of the huge size of his manhood, has been granted divorce by a local Sharia Court.Aisha had told the court that she was traumatized after she was invited to his parent’s house and they had sex. She had married Maizinari after her first marriage failed.She narrated the sex experience as a nightmare, even when she reported to her mother who gave her some drugs and asked her to endure.She opted out and filed for a divorce when it became obvious that drug could not help.Her husband who did not contest her application, requested from court that Aisha should repay him the entire money spent during courtship and her dowry which he estimated to the total of ₦60,000.The court granted her bail with no objection from the husband.

Senator Ademola Adeleke, Davido’s Uncle gifted Adenike, 25 ( Singer Davido’s Cousin) a Benz upon her graduation from Oak-wood University in Huntsville, Alaba United States in May 2020. There was also an in-house celebration with few family and friends.Senator Adeleke shared the news of her graduation and gift on Instagram.
Until June 2019, Ademola Adeleke was the Senator representing Osun-west Senatorial District. He contested the governorship election against Gboyega Oyetola of All progressive Congress who won the the election in 2018.

Ramon Olorunwa Abbas, a Nigerian Instagram celebrity known as Hushpuppi may be facin 20years jail term in the United States as he is facing criminal charges for allegedly laundering of hundreds of millions of from business email compromises (BEC) frauds, and other related scam activities.

The US Department of Justice had said on a statement on Friday that Abbas would face a statutory maximum sentence of 20 years in Federal prison if convicted of conspiracy to engage in money laundering.

In a criminal complaint filed before the United States District Court for the Central District of California, the FBI’s Special Agent, Andrew John Innocenti said “beginning no later than 15th of October, 2019, and continuing through at least 17th of October 2017, in the country of Los Angeles, in the Central District of California and other places the defendant had conspired to launder proceeds fraudulently obtained from a law firm.

DOJ’s statement had revealed that Husspuppi and his conspirators allegedly tricked one of the law firm’s paralegals into wiring money intended for the client’s real estate refinancing to a bank account that was controlled by them. they also targeted a foreign bank, an English Premier League soccer club and a U.S Law Firm.

Hushpuppi was arrested in Dubai hotel in June and was extradited to U.S on Wednesday.

DOJ said he made his fisrt appearance in the U.S court on Friday morning in Chicago while he arrived on Thursday and he will be transferred to Los Angeles weeks to come.

Oba Adeyeye Enitan Ogunwusi, the Ooni of Ife had announced through a post on his Instagram page that he would be responsible of the tuition fee up to tertiary institution and still employ upon graduation the 17-year-old boy, Samuel who drew a pencil portrait of him.The ooni had narrated that he was tagged on twitter few months back from the young man who made a brilliant pencil drawing of him and to appreciate his art, the Ooni invited him to his palace.The 17-year-old Samuel is about to graduate from secondary school and the ooni will be in charge of him henceforth.

The police have arrested and paraded two Chinese nationals in Abuja for locking up eight (8) Nigerian staff in an apartment for past four months.As at the time of this report, it is not certain the kind of job these Nigerian staff offers the Chinese couple, but in affirmation, they were domestic staffs.
A tip-off by a radio listener who called during the “Brekete Family” programme of the human rights Nigeria, had made a team of six police officers from the FCT Divisional Police Command in Utako, the International Centre for Investigative Reporting (ICIR), to swing into action and raided the residence of the Chinese nationals at No. 117, Jabi area, Abuja.A man who gave his name as Alex who is a driver to the couple, said that since the outbreak of Covid-19 pandemic, he and the other 7 domestic staffs have been working.A woman amongst the eight rescued narrated that a certain amount of money is dedicated from their salary if anyone goes out. Even when she complained of being sick, they refused her going out. No one leaves the mansion.₦3,000 was deducted from another worker because he stubbornly went out to fill his pension form.The staffs complained they were not given food by the Chinese couples aside their salaries.Initially, the Chinese couple were putting calls through and refused to follow the police men but later succumbed as they were instructed to go with the police.