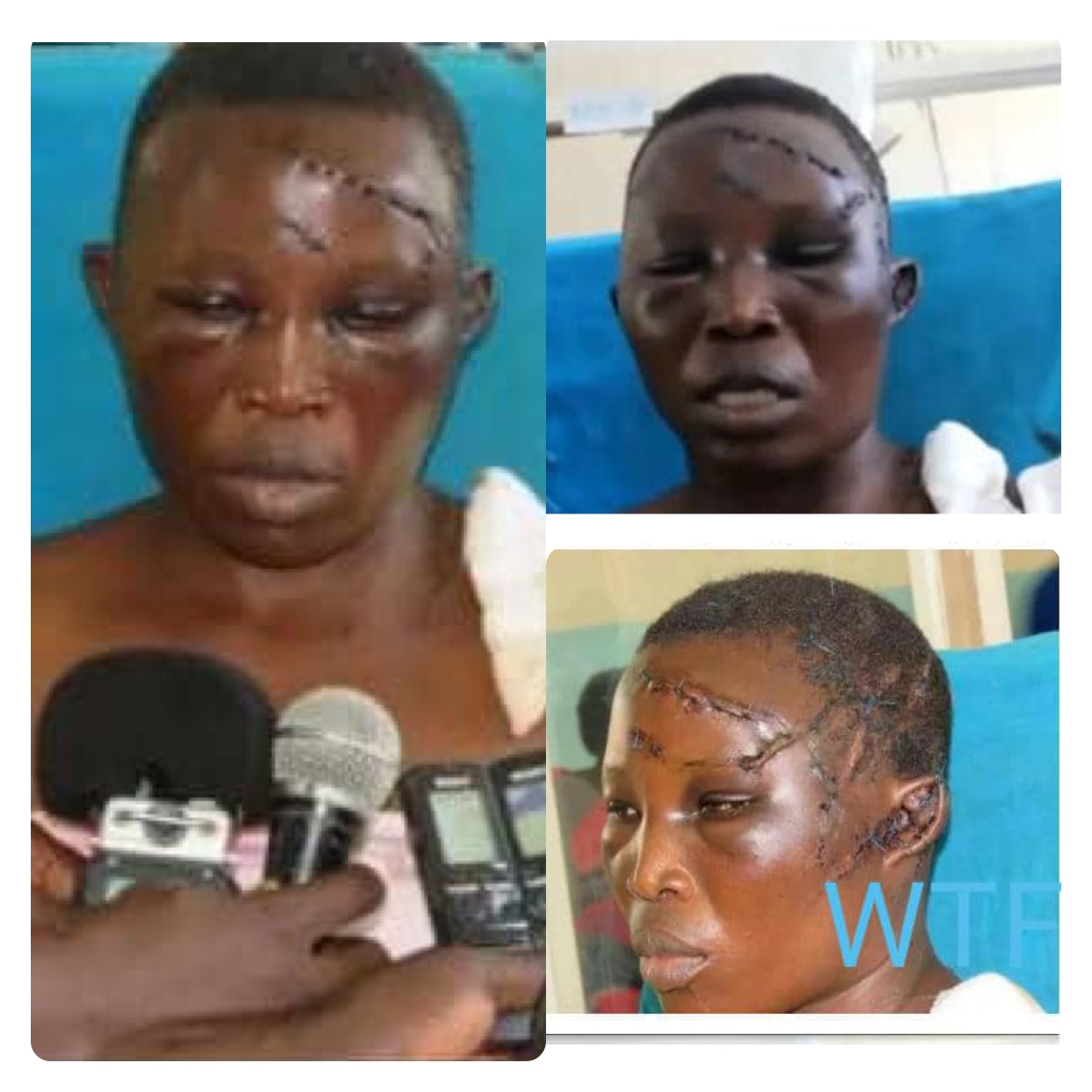 A 40-year-old woman, Judith Anyago, is battling with her life,over attack by her husband with a machete for denying him s*x.

The incident happened in their home Misaro village in Siaya county, Kenya.

According to the woman account, she was forced to deny her husband sex because he is allegedly HIV-positive. She also accused him of having extramarital affairs, particularly after discovering condoms and female undergarments that did not belong to her in his trouser.

The woman, who suffered severe cuts from the attack, was rushed to the Busia County Referral Hospital in Kenya, where she’s currently receiving treatment.

The victim’s nurse Rose Kwena, confirmed the incident, saying doctors are currently managing the patient well but will determine the extent of injuries after a CT scan.

While condemning the incident, Anyango’s brother-in-law Festo Onyango Odhiambo expressed disappointment in what his brother Jackton Opondo did, adding that they had scheduled a family meeting to resolve the squabbles between the couple.

The family is now pleading with law enforcement to find and apprehend the suspect, whom they describe as a dangerous man. Yes

Veteran Nollywood star, John Okafor popularly known as Mr Ibu has revealed that he is currently in the hospital because he was poisoned.

The actor who spoke to Saturday Beats said he wasn’t poisoned in his village but Abuja at an entertainment event. He also revealed that he is recovering gradually.

“I just got poisoned again. It seems my enemies are using me to rehearse (their powers). This time, I wasn’t poisoned in the village. I was poisoned in Abuja last week at an entertainment event. I really cannot explain how I was poisoned because it was a gathering of people, though it was not a big event.

“I am recuperating, although I have neither worked out nor driven since I got ill. However, I intend to take a walk this (Friday) evening, because I am hopeful that I would get better. I am eating well now, and I’m prepared to go back on set any moment from now.”

The actor also lashed out on those soliciting funds on his behalf without his consent. Mr Ibu added;

“Some people have sold me. They have not heard from me and all they want to do is ‘sell me’. But, their plans won’t work because God has raised me. I am not begging anybody for money. My condition is not as critical as some people are making it seem. Anybody who has made it a point of duty to talk about my sickness and take advantage of it should stop. I am here (hospital) with my wife. I am not saying all my friends that are supposed to visit me and bring me money cannot do that. But, I have never asked anyone to beg people for money on my behalf. They should stop. If I want to die, I would let them know, since they seem to be so interested.”

This is coming weeks after her brouhaha with 2Face’s other baby mama, Pero Adeniyi, regarding ‘the first’ in rank to the singer.

Annie Idibia took to her Instastory page to shower praises to the kids jointly while praising Sunmbo’s kids as the muscle that her daughters need.

She wrote,
“My daughters are so blessed to have amazing big brothers to love and protect them!! Another image of __ my world. Ok! When I say I am blessed!!!!”

In another post, she added, “Just 3 and a half years ago .. •lithese children Dey grow fast 000 ahh!!! When I was made the FIRST EVER Nigerian in history – to become Brand Ambassador for this Coca Cola ! Took my kids along with me ! Yes 000 ! What is mama di mama without her beautiful n handsome children.”

A picture making rounds has captured a Widow sleeping outside after she was allegedly thrown out of her home by her in-laws, just one day after her husband’s burial.

The Information Gathered by a reliable source, disclosed that, The burial held on Friday, March 25, and the widow was allegedly thrown out on Saturday, March 26.

In a Post shared online,The widow is seen sleeping on the floor, wearing just a wrapper and head warmer. Her slippers is seen beside her.

On Facebook, call for justice for the widow who is from Nanka in Anambra state. According to her, the woman built the house with her money, yet that didn’t stop her husband’s family from allegedly throwing her out and locking the house to prevent her from gaining entrance.

The said neice to the window claimed the widow was thrown out without her belongings and she has nothing with her, not even the clothes she’s meant to wear for her the burial service on Sunday, March 27.

A Nigerian female inmate of Kashimpur Women’s Central Jail in Bangladesh, has died at Dhaka Medical College Hospital. The deceased who has been identified as Chidimma Abel, from Agulu Obeleagu Umana in Ezeagu, Enugu state, died on Friday, March 18, 2022.

Later she was moved to Dhaka Medical College Hospital on Thursday as her condition deteriorated. She died while undergoing treatment on Friday, said Halima.

“Chidimma Abelf had been lodged in the Kashimpur jail after being arrested in a Digital Security Act case filed against her,” she added.

An Indian national, Yuvraj Kumar Mehra by name was recently arraigned by the Ibadan Zonal Command of the EFCC, before Justice Olanrawaju Majekobe of the Ogun State High Court on eight count charges which bordered on conspiracy and issuance of dud cheque to tune of N70million (Seventy Million Naira).

The defendant was arraigned alongside his firm, Dolphin Steels Nigeria Limited.

Yuvraj was arraigned for his refusal to pay the Ibadan Electricity Distribution Company Plc, IBEDC the said sum for power supplied to his company.

Investigation carried out by the operatives of the Ibadan Command revealed that the defendant issued a total number of thirteen dud cheques for N125, 000, 000.00 (One Hundred and Twenty Five Million Naira) to IBEDC, between October 2, 2018 and December 3, 2018.

Upon constant effort by IBEDC, the defendant made part payment but reneged in paying the balance of N70million and all attempt to get him to pay were abortive.

The Former governor of Enugu State and the current Senator representing Enugu East Senatorial Zone, Senator Chimaroke Ogbonnia Nnamani says he will continue to be professionally discharge his constitutional responsibilities.

Nnamani affirmed this while making public his achievements in the Nigerian Senate.

A Viral photo making rounds shows the moment a 9-year-old boy identified as Isaac with his 11-month-old younger brother tied to his back,who are both orphans were roaming the streets of Kinshasa, Dr Congo after their aunt accused them of Witchcraft and sent them out of the house.

According to reports making rounds, the two little boys have been living on the street for about 2 months and feeding with the help of generous people they find on the street.

Isaac disclosed that his late father was a poor taxi driver and his mother died from Cesarean section while giving birth to his little brother. 😢 😭

In an emotional statement, Isaac was quoted to have said, “if it is to die of hunger together with my little brother yes I will, but I will never abandon him”…..
What a world.

Justice Muhammad Saidu Sifawa of the Sokoto State High Court on Friday March 25, 2022, sentenced one Labaran Aliyu to five years imprisonment on one count charge bordering on obtaining by false pretence to the tune of over Five Hundred Thousand Naira.

The convict had falsely presented himself as a marabout with powers to double money given to him through the use of spiritual powers, duping unsuspecting members of the public.

Nigerian first woman to receive a Doctorate Degree died on Friday, at the age of 89.

Remember that Alele-Williams was appointed the vice-chancellor of the prestigious University of Benin in the year 1985.

Recall she fought against cultism in the institution which reduced drastically during her tenure.

May her soul rest perfect peace

Veteran Ghanaian actor, John Dumelo, has vowed to walk barefoot from his nation’s capital, Accra to Lagos, if the Super Eagles of Nigeria beat the Black Stars on Friday.

The Nigeria Super Eagles and Black Stars are set to play at the Baba Yara Stadium the first leg of their World Cup qualifiers.
The second leg will be played at the Moshood Abiola Stadium, Abuja on Tuesday.

Dumelo said,
“There’s no way Nigeria will win today’s match. If they do, I, John Setor Dumelo, will walk barefoot from Accra to Lagos tomorrow morning with my ginger on my head. Super Eagles my foot.”

Veteran Nollywood actress Toyin Abraham Has Been Dragged To The Mud For The Award Of Recognition By The Lagos State Governor Babajide Sanwo-Olu in Commemoration of 2022 International Women’s Day.

Most female Nollywood Actresses such as Mo Abudu, Adunni Ade, Adebimpe Oyebade and Toyin Abraham received the award for their outstanding works, inspiring young girls, including women for contributions towards building a greater Lagos.

Toyin Abraham took to her Instagram Page to express appreciation to the Lagos State Governor Babajide Sanwo-Olu and prayed for the State like other Nollywood stars, But this earned her
criticisms as many fans stormed her comment section, claiming she has been bought and will avoid speaking against the current administration of Sanwo-Olu.

The well talked about nominations were announced on Saturday by actors, Adesua Etomi-Wellington and Etim Effiong via a Livestream.

While reacting to nominations, the ‘Jenifa’ actress said, “I’m so gassed right now!!! Thank you!”

Nollywood Veteran actor, Funsho Adeolu, is on the news as he said he does not fancy being called a celebrity.
According to him, he prefers to be called a thespian.

When Asked how he has been able to maintain relevance in the industry for as long as he has, the role interpreter told Saturday Beats, “Perhaps, it’s because I am original.

“I have serious passion for acting. I am not about money or fame. That is why I don’t like being called a celebrity. I prefer to be called an actor” he continued,

“A celebrity is a ‘diva’, while an actor is a thespian. A thespian understands that no matter what happens, the show must go on.

A thespian is focused on getting the job done and he wants to impart knowledge. It is not just about showing his face in a movie.”

When asked about changes he would like to see in Nollywood, Adeolu said, “I will like to see more professionals in the industry.

If you are interested in acting or being behind the camera, you have to get the necessary training. It is not just about having an interest in it; you need to get formal training.

“One also needs to protect one’s name and brand. Some people are all about making money; while others are particular about maintaining a good name. Having a good name is better than any other thing. One should have a name that unborn generations would be proud of.”

The Nollywood actor, Yul Edochie, has claimed that some people cried when it dawned on them that former Anambra governor, Willie Obiano’s tenure has come to an end.

From a post on his Instagram page, Yul Edochie described the embattled former governor as a “good man who did his best for Anambra.”

Recall that Yul Edochie was a Senior Special Assistant to Obiano.

Obiano has been with the anti-graft agency, Economic and Financial Crimes Commission since his tenure expired on Thursday.